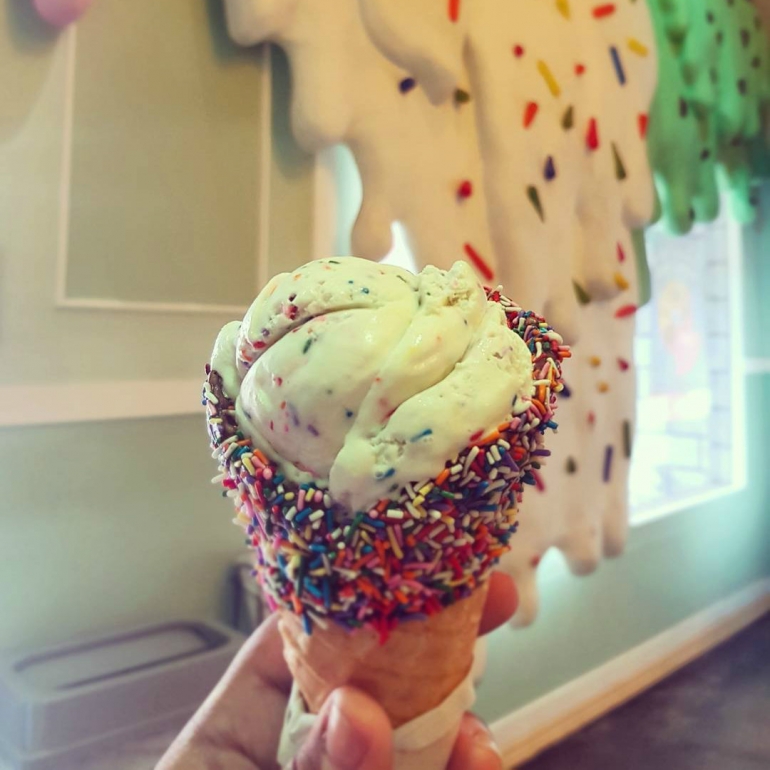 Just over a year ago, Martha Stewart and Snoop Dog dined on a 5-foot-long ice cream sandwich lovingly created by sweet treat specialist Doc Burnstein’s Ice Cream Lab from California’s Central Coast. This decadent treat boasted over 60 gallons of ice cream and was cut and served with the aid of saws rather than a knife and fork. The very same family-friendly ice cream chain which claimed fame for this frozen feat is coming to East Sacramento to provide locals with countless creative ice cream concoctions and riveting flavors. Doc Burnstein’s will be moving into East Sacramento according to plans filed with the city. It appears they will take over the building that previously housed the beloved Burr’s Fountain on Folsom Blvd. Doc Burstein’s Ice Cream Lab currently has 3 other full locations (with another location opening in Chico before the end of the month) in San Luis Obispo, Santa Maria and Arroyo Grande. These locations offer tours which allow customers to gain a glimpse of the inside workings of a creamery. They plan to open 100 locations in California by 2026. Doc Burnstein’s ice cream can also be found in a number of retail locations throughout Central California.

Doc Burnstein’s Ice Cream Lab has a plethora of flavors that range from nostalgic classics like Rocky Road to wacky and intriguing originals like Motor Oil (dark chocolate and Kahlua) or Jack & Coke. Additionally, the ice cream lab offers up rotating monthly flavors which can be viewed on their website. Current featured flavors include Black Raspberry Cheesecake and an Elvis Special (banana ice cream and peanut butter swirls) while upcoming flavors play to an October spirit with flavors like Black Licorice and Harvest Pie (a pumpkin ice cream with pieces of walnuts and pie crust). These ice cream masters also specialize in ice cream cakes which can be reserved or custom made.

Amanda Hutchins is a freelance content and curriculum writer, a playwright, and a mental health advocate. She is a California native and a Bibliophile Extraordinaire. For more of her words, visit https://twitter.com/AmandaCHutchins

Hyper Likely is dedicated to collectively discovering what’s opening up in the Sacramento region and when.